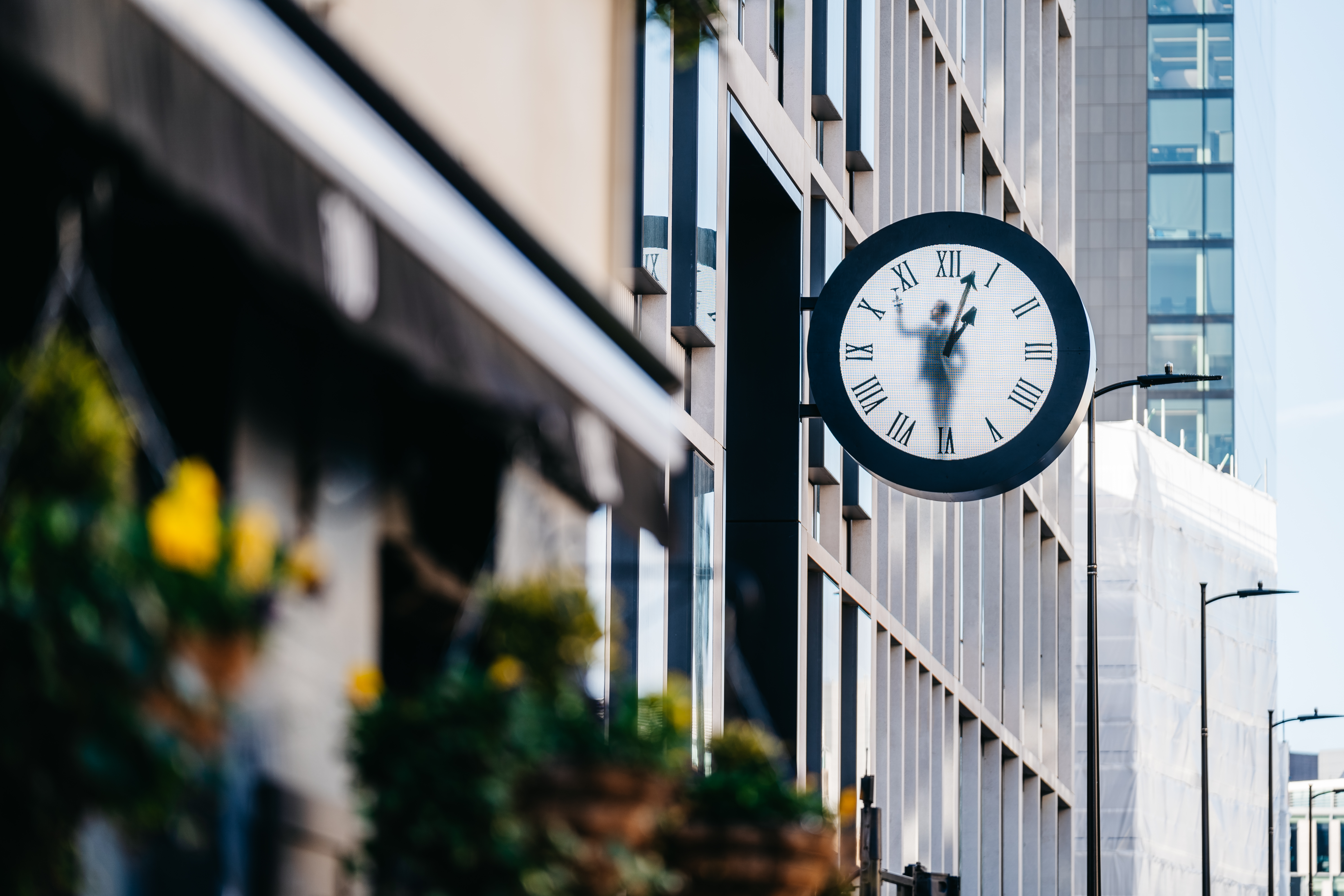 A new piece of public art will greet Londoners frequenting Paddington this week. The latest work in Maarten Baas’s Real Time collection has been unveiled, adorning Fifty Paddington, Invesco Real Estate and YardNine’s new office and retail development at 50 Eastbourne Terrace, next to Paddington Station and the new entrance to the Elizabeth Line.

Baas’s Real Time collection sees actors filmed for 12 hours while they indicate the time. The resulting video art serves an artistic and creative purpose, as well as the practical purpose of telling passers-by the time.

Located 7.7 metres above the public footpath, this new commission in London features a simple, contemporary clock design depicting the time in a video format. The film features the artist, Maarten Baas, who has been filmed in his studio drawing the clock’s hands every minute. His costume gives a nod to Paddington Station’s famous architect, Isambard Kingdom Brunel, where the artist has been filmed in HD in his studio drawing the clock’s hands every minute. He alternatively pauses and look out at the view before going back to work to ensure that a new hand is drawn every minute whilst pushing the hour hand along.

The new clock in London is the latest in a series that includes the Schiphol clock in Amsterdam Airport, in which a man can be seen painting the time minute by minute. The worker’s blue overalls are identical to the uniform of the Schipol maintenance team, while the yellow rag and red bucket pay homage to Dutch artist, Mondrian.

Mark Younger, Director of YardNine, which is developing Fifty Paddington, said: “We are excited to unveil this modern twist on the traditional public clock as it becomes a part of London’s long history of public clocks, including the city’s first at St Dunstan-in-the-west in 1671, Six Public Clocks at Canary Wharf and, of course, the iconic Big Ben. Fifty Paddington was conceived as an attractive, productive and efficient workplace for modern businesses, and Maarten’s impressive work will further distinguish its place in London’s urban landscape.”

“Real Time is a term used in the film industry. It means that the duration of a scene portrays exactly the same time it took to film it. I play with that concept in my Real Time clocks by showing videos where the hands of time are literally moved in real time. The pieces examine the interplay between time as something rigid and formal, and art as something creative and organic. The concept feels particularly relevant close to a major transport interchange such as Paddington Station, where there is a heightened importance attached to timekeeping.”

Those working at the building will benefit from close proximity to national and local travel links, the leisure, retail and dining options of Paddington Basin and the West End, and the green space of Hyde Park.

Patrick Morey-Burrows, ArtSource was appointed to deliver the public art for 50ET. ArtSource is a progressive consultancy, which is extending the scope of contemporary art. Instead of an afterthought to the architecture and the public realm, art is thought out to create an integral artwork not incidental part of the narrative of our built environment.